Reunited in Tokyo, Dan and I settled into our room at the Ueno Youth Hostel. This was selected due to its proximity to the University of Tokyo, where I was scheduled to give a lecture to my professional organization’s student chapter there. It was a nice space/location, but not the best value based on its price. I got my talk ready the day before, and then had a great time getting to chat with students and enjoy a party after my talk on Friday evening.

The next morning we headed to Akihabara to meet up with an old friend from when I was living and working in Japan. Abe-san loves beer, and back in 2007 he took me to visit the Nest Brewery in Ibaraki, a little ways north of Tsukuba where we lived. Since then Nest has opened a location in Akihabara, Hitachino Brewing Lab, so we met him there to have some drinks and catch up.

The location is beneath the tracks of a train station that is no longer in use (but tracks still are in use), and the platform has been converted into a pretty seating area, where a bunch of people were working on some kind of quiz for fun? Never really figured that one out. 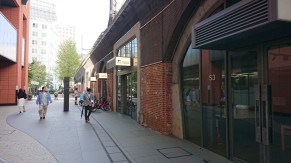 From there we went to Kanda Matsuya to have a light meal of soba. Abe-san hadn’t been there before, but he said it was famous and had been running for many years. 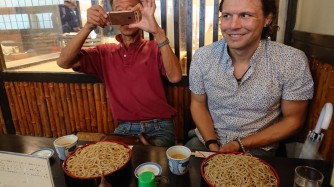 Our final stop was Takemura, a sweet shop nearby where we enjoyed some traditional Japanese desserts including a very interesting salted cherry blossom tisane. After that Abe-san had to get home, so we walked him back to the station and said farewell. It was so good to see you Abe-san, and thank you for showing us some great new stuff in Akihabara! 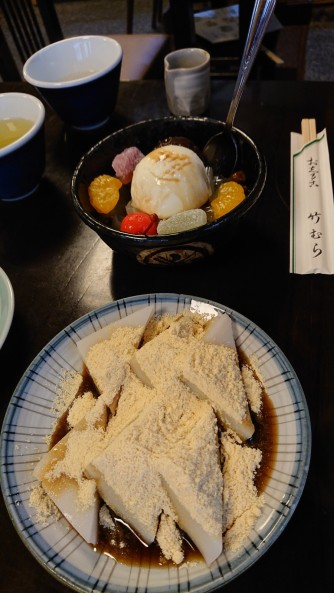 That evening we headed to Odaiba to catch up with some friends for dinner. I met Popi during at an event at my last conference in San Diego, which she attended because her husband Kuroda-san also volunteers with my professional organization. Popi is the owner of several Indian restaurants in Tokyo, and she invited Nabila (who we hung out with earlier in our trip), Dan and myself to join her for dinner at Mumbai with Kuroda-san and their son Ken.

The food was fantastic, and we had a great time getting to talk about travels, talk some shop, and hear about Ken’s work in anthropological food studies in India. We even got to sample the house shochu, a very Japanese liquor, and I really enjoyed the sweet potato one. Thank you so much Popi for organizing, it was a true delight, and it was lovely to meet you Ken! 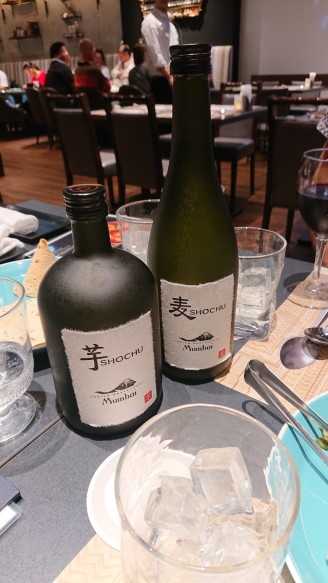 After dinner Nabila, Ken, Dan and I took a walk to see the “life size” Gundam statue nearby. It’s pretty cool, but the “transformation” it does at 5 pm is a bit of a bust (Dan and I caught it just before dinner along with a few other Odaiba sites). I’d also like to know where the real Gundam is if this is just the life size model ;0) 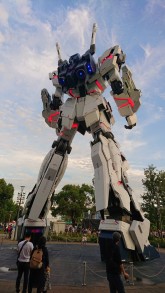 The next morning Dan and I checked out of Ueno Youth Hostel and I went to get a final lunch of Katsukare, which is the same breaded and fried pork cutlet of katsudon, but it is served with rice and Japanese curry. The clerk at our hostel recommended Hinoya and I wasn’t disappointed. 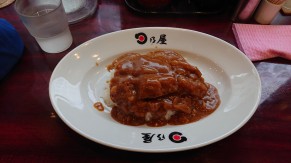 After that, we said farewell to Tokyo and hopped on the Tsukuba Express to a visit with some former colleagues from when I lived there back in 2006-2007.

Kurosu-san and Yasuda-san met us at the train station, and from there we went for a short laboratory tour at the National Metrological Institute of Japan (NMIJ) campus, where I worked with them. It’s a beautiful campus and it had been over a decade since I had been back, so it was fun to visit. 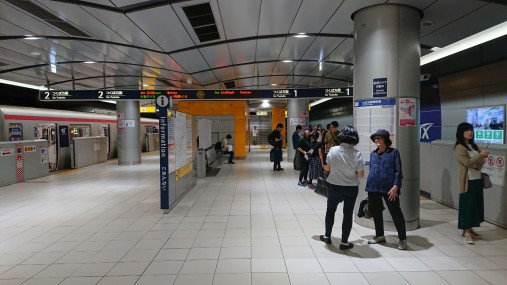 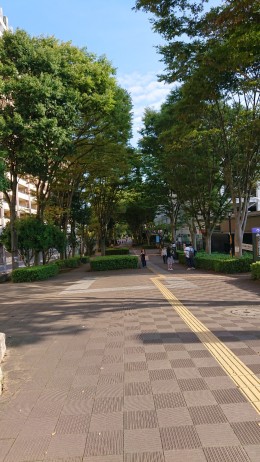 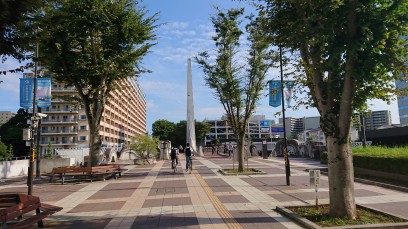 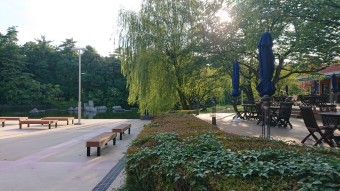 They’ve also installed a small museum since I left, one that showcases cool technologies developed at NMIJ and AIST, including a single-walled carbon nanotube material displayed as an origami crane, genetically modified strawberries, brain machine interface prototypes, and some fun robots, including robotic seals used for therapy. 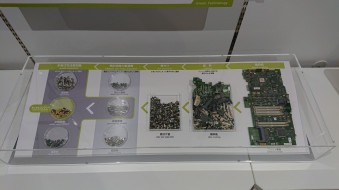 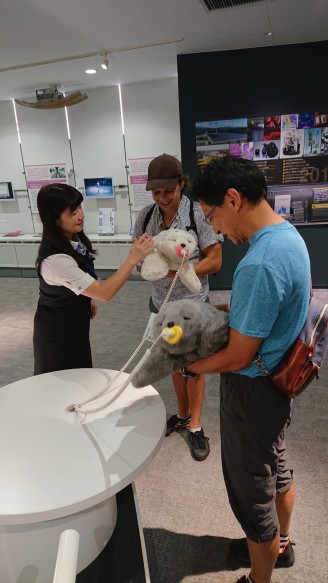 After that we met up with Kurosu-san’s wife, and the five of us went to a small beer festival happening near the station. We got beers and snacks, and hung out for a while, catching up on what had been happening since we saw each other last in 2014. 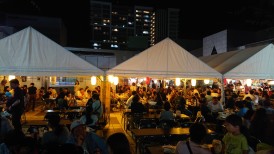 After the beer we adjourned to the Kurosu-san’s apartment to have some shochu (a gift from Popi!), snack, and play with Macaron, their adorable poodle. We said farewell to Yasuda-san who had to get home, and then we got ready for bed. 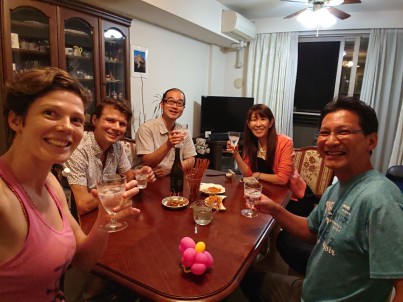 The next morning Kurosu-san drove us to the airport, which was so nice of him! Thank you sooooo much for having us to stay, it was great catching up with you!

Then Dan and I were off for a long bizarre itinerary from Tokyo to Chania, Crete, Greece. We booked the ticket with awards miles and were “rewarded” by American Airlines with an incredibly strenuous series of flights: 10 hours to Helsinki, Finland, followed by an 18 hour layover, and then a flight to Heathrow and a whopping 22 hour layover, then a heinously early flight from Heathrow to Chania, concluding our 55ish hour transit.

It was our first time flying Finnair, for our flights into and out of Helsinki, and overall we were really happy with it. The food was not very good, but the in-flight entertainment system was responsive and well stocked, and you could go to the rear galley of the plane for complimentary beer, wine, and soft drinks, as often as you might want to, or were willing to risk judgement for being a lush by the flight crew. 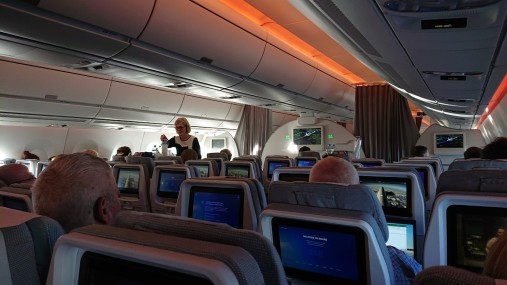 The flight to Helsinki was uneventful, and the airport isn’t far from downtown, so we hopped on a train to downtown to check it out. We saw the wharf, including a farmer’s market and the Old Market Hall where we got pastries and coffee. 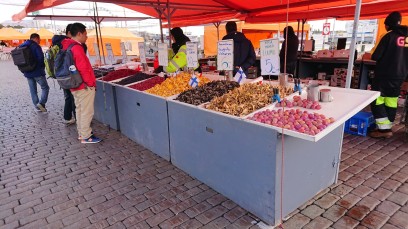 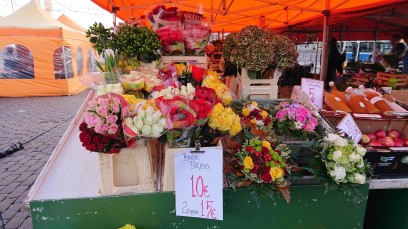 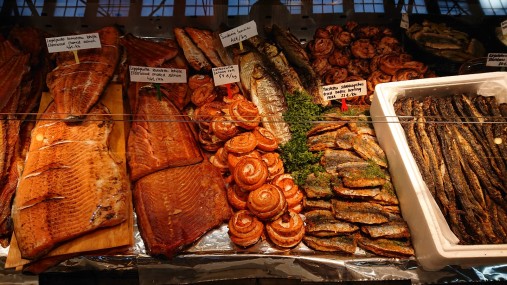 We also swung by the Uspenski Cathedral and the Helsinki Cathedral, the latter of which had an amazing pipe organ, and it was free to enter and tour. 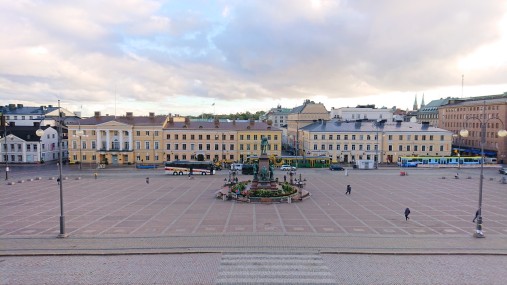 There were also some really cool handicraft shops located near the Helsinki Cathedral, and we stopped by a grocery store to pick up a meal to eat back at the airport. 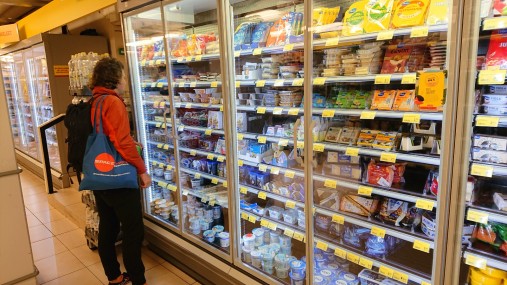 I had seen a lot of posts about Finnish saunas, and I found a swimming pool with saunas nearby, the Yrjönkatu Swimming Hall. Luckily for me, it was one of the days it was for female use only, and it was swim suit optional, which I found intriguing. Part of the reason for this was that the locker rooms line the pool area and is visible through open arches, so with the locker room fully exposed, making it operate single-sex makes sense. I took a few rounds in the sauna and the pool, before dressing and meeting up with Dan. Sorry, no photos since nude bathing.

Something I found interesting about Finland was that evidently I look Finnish enough that people addressed me in Finnish far more often than English. I found it incredibly ironic that in countries where I had some language ability, such as Latin America or Japan, I was so obviously a foreigner that people would almost always address me in English, but in Finland where I spoke not one word of the native language, that was what I got spoken to most of the time, especially at the bath where, with no swim suit or tattoos, nothing could obviously indicate my foreigner status.

Another random note that probably only I really care about (and maybe my dad, what’s up dad?) is that there are crab apple trees in the parks in Helsinki. This is a tree often used in the US as an ornamental tree because of its colorful red fruit. Most people don’t like the fruit because it is suuuuper sour, but I am a fiend for most things sour, and spent a good portion of my youth getting kicked out of ornamental crab apple trees for climbing them and picking the apples. Well, Finland has ornamental crab apple trees too, but they were the biggest crab apples I have ever seen, it totally blew my mind.

Back at the airport we enjoyed our grocery picnic, and went through security, which was open 24 hours. Also, Finnair permitted us to check our bags back in when we arrived in Helsinki, so we only had to deal with our carry on luggage. We spent a moderately uncomfortable night sleeping in a boarding area, and then boarded our flight for Heathrow (and got to watch some de-icing procedures). Both Finnair and HEL get a thumbs up from us! 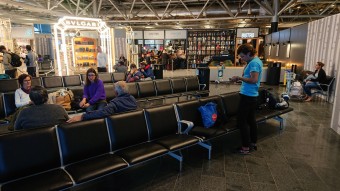 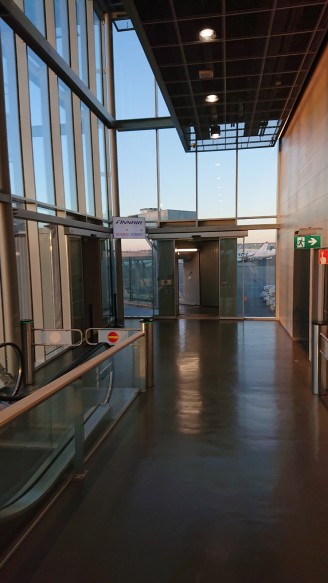 Immigration in Heathrow was super busy, but it wasn’t too difficult to navigate our way to the bus terminal where we caught a bus to Uxbridge where a friend of mine lives. 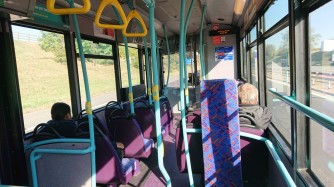 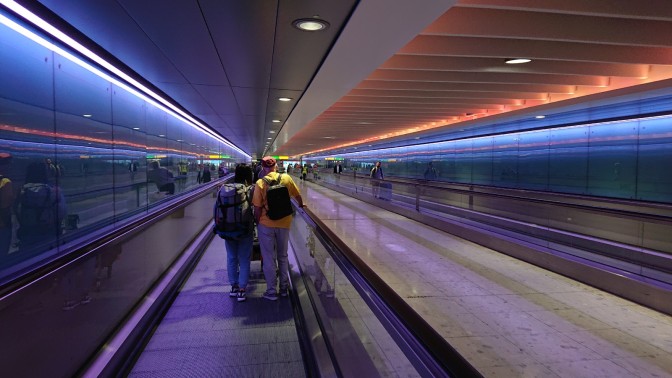 Chamini is faculty at the university, and she came to meet us and let us in to her apartment where we showered and napped, and went to lunch at the Three Tuns pub. 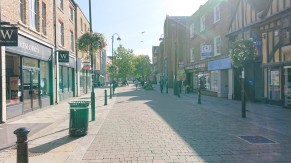 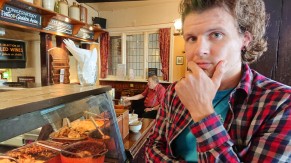 That night we went out for dinner together and got to spend some time catching up since last we’d seen each other in New York several years earlier. Then we got our things and headed back to the airport so that we could sleep there and be in time for our flight which left at 7 am (ewwwww). 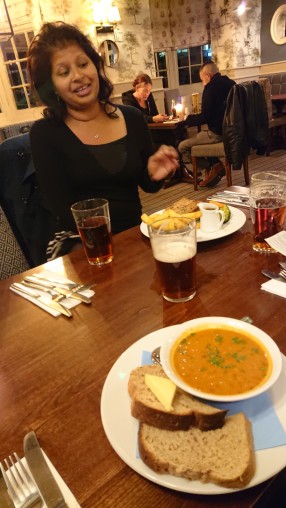 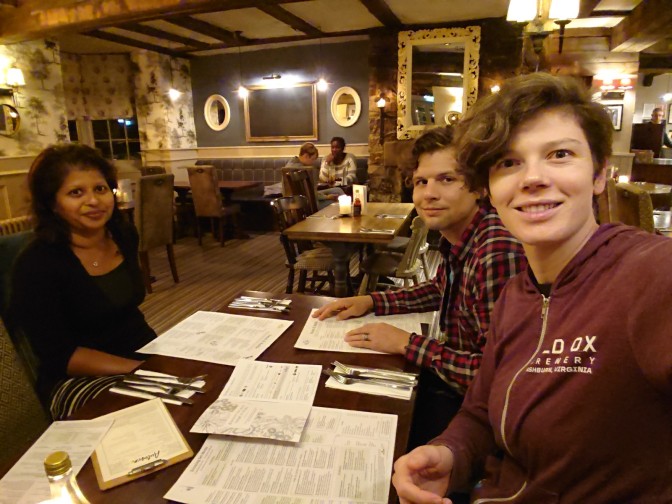 Unfortunately, Heathrow is not Helsinki, and we discovered that security was closed. I was never able to get an answer, even from security employees in the morning, about when security closes. The internet claimed 11 pm, and the two employees I asked argued about whether it was 9 pm or 9:30 pm. Boo for Heathrow.

At any rate we found ourselves sleeping on the land-side of the airport with a bunch of other travelers and more than a few stinky homeless people (like, reallllly stinky, not all of them, but the stinkers were really pungent).

As soon as security opened we made our way through, then hunkered down for another nap until our flight departed. This last leg was on British Airways and not Finnair, and we were insulted that they didn’t serve even complimentary coffee, not to mention no in-flight entertainment system. Worst of all, even though we booked this series of flights using points, and any awards travel booked through BA has insanely hefty surcharges. Boo also for British Airways.

But, they did get us to Chania without incident, and thus began in earnest our final European leg of our journey…