Our main purpose in visiting Hong Kong was to get our Chinese visas. The ‘proper’ way to get a visa to China is to mail your passport to the consulate in your home country. In the US there are specific consulates assigned to each geographical area. We didn’t know this in advance of our trip and since that obviously wasn’t going to work from New Zealand. Our only alternative was to go to Hong Kong, where US citizens can stay visa free for 3 months and apply for a visa at the Chinese consulate there. Not sure why this exception exists but we took advantage of it.

Our overnight flight from Auckland arrived early in the morning and to get around we purchased a HK MTR railpass called the Octopus Card. The Octopus Card is an interesting story by itself. It is a proximity card that is quite common nowadays in metro systems. When it was introduced many vendors in Hong Kong began accepting the card as a form of payment. So if you top up your Octopus Card you can buy rides on the metro rail as well as tap to pay in most businesses in the city. Pretty cool. Nowadays phones are the cool kid way to pay for things, but still the Octopus Card is pretty essential for visiting Hong Kong.

Wit the Octopus Card we purchased the 1 way AETP (airport express transit pass). This pass gave us one trip on the Airport express line to the city center and then unlimited metro rides for three days.

Things to consider: you can get a discounted ticket on the airport express line as a group of two or more. However the Octopus card doesn’t cover trips on most of the other buses or light rail in the city, so it’s really only a good deal if you are spending quite a bit of money per day on the actual MTR system. It also doesn’t cover trips that start or end in Lok Ma Chau or Lo wu, the border stations to mainland china.

The good news is that it’s actually more than a three day pass. It covers 72 hours from the time you first use it and then until the end of the day that the 72nd hour falls on. So if you get it in the morning it’s basically always a 4 day pass. The card requires a 50 HKD deposit that can be refunded along with any remaining balance at an MTR station when you are finished (but they deduct a 9 HKD service fee if you return it before 30 days is up).

Armed with our Octopus Cards we made our way directly to the visa center on Hong Kong Island. We arrived at 10 am and there was a huge line of maybe 100 people. It was a Tuesday, and I had read that there is typically a bigger crowd at the beginning of the week, but we showed up the day after a three day weekend so the place was slammed.

We spent about an hour in line waiting to get a ticket, then 5 hours waiting for the ticket to be called, then an hour going back and forth with the counter agent, then we had to get back in line to pay. It was a long 8 hour ordeal. When we returned on the fourth day to pick up our passports (and we were granted our visas! success!) that we saw the normal Friday crowd. There were no lines and only less than half the seats in the place were filled. I’m sure we could have been in and out in around 2 hours if we had showed up on a Friday. 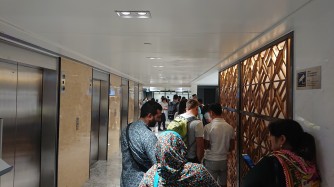 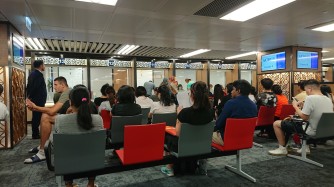 The preparation for the visa process wasn’t much fun either. I fretted for hours preparing all of our documents and making bookings over the course of a month. They require that you submit a detailed travel agenda including cities, dates, and hotel bookings for your entire stay. I used used this website as my primary guide. It was pretty much perfect. It’s up to date and thorough in the way that I like my travel guides. There were only a few things that I would add based on my own experience.

First off, you’ll need to get your passport photos taken on site. There is just no way that you’ll do it right otherwise. They are super picky about it. I was lucky that some guy told me that I had to take my earrings out, and no jewelry is allowed. I’ve never seen that requirement for a visa photo.

Now you could try to do it with your own photos since they do allow you to run off and print new copies of things that you screwed up when you get to the ticket counter. We found that out when we showed up at the window and the agent almost immediately denied our invitation letters from friends that we were going to stay with. They said that we had to have pictures of the Chinese id cards or passport for a US citizen of anyone that we claim to be staying with (and proof residence for a non-Chinese resident).

The solution was to book hotels on booking.com for those parts of our stay. It was the recommendation of the agent actually. We made the bookings on our phones and then ran off to print the confirmations. Everyone knew full well that the reservations were going to be cancelled and their is no requirement to stick to your plan. It’s really awful for the hotels that have to put up with this booking and cancellation and it’s the fault of this silly policy. (I realize that the US is probably even worse in terms of letting in tourists of course).

But anyway, it was very frustrating that I went to the trouble of making an actual legit plan only to have it discarded, forcing me to make up some BS that then needed to be canceled. I also felt bad wasting my friends time to write a letters of invitation. Finally I was running around trying to make color copies of our passports in New Zealand, which was weirdly impossible and quite expensive. But it turns out they don’t have a color printer on site and only need a black and white copy of things for the application. So no need to fret over color copies.

For US citizens every Chinese visa, no matter what the duration, costs the same so I applied for a 10 year multiple entry visa and we got it! So I’m definitely not going through this again, but if you are preparing to get your Chinese visa in Hong Kong, these are my recommendations. Determine your entry and exit points, and have valid bookings there, as well as your departing ticket. But since you are not required to adhere to your submitted agenda, but if you will be making multiple stops, just make a cancel-able booking at one of them that covers your remaining time in China. Less work for you, less paperwork for the office.

In the four day interim while we waited for our visas to be processed (which I spent fretting that it wouldn’t be approved), we explored Hong Kong. We were staying with a great Couchsurfing host Francis out in Sheung Shui, which is a quite remote area of Hong Kong near the border with the mainland. We commuted into the city each day and spent most of our time in the central business district. I think there are a lot of other interesting areas in Hong Kong to explore, but we had limited time. The downtown area felt much more like the US than China (meaning no street vendors unfortunately). 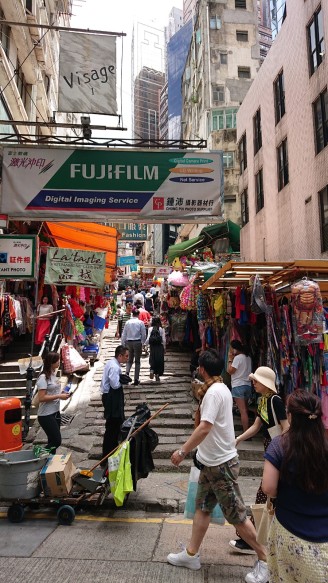 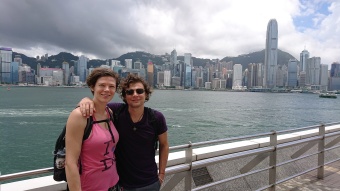 We had some trouble finding places to eat since google maps isn’t super fleshed out there, but we still found some delicious spots to eat. The number one priority for Christina was having Hong Kong’s famous Dim Sum. We chose a highly talked about place called Ding Dim. It’s recommended by Nomadic Matt and Tripadvisor, so it’s quite a popular foreigner destination. It had an English menu and quality food. More or less it was the type of place that you might expect to find in the US. I was hoping for something a bit more like China Pearl in Boston. Which Christina especially misses.

We also hit up some noodle shops during our stay. We had no clue if we were eating typical Cantonese food but they were excellent. These places definitely didn’t have English menus so we made due with picture menus or going back to the kitchen to point. 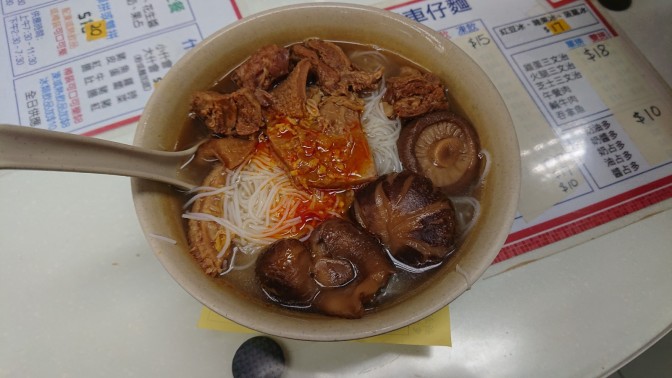 Finally, I did walk away with a few egg tarts. They were marginally cheaper than the ones that I first had in the Boston Chinatown. I can’t say that they were necessarily any better, but they were definitely plentiful and I can say with confidence that you can’t go wrong with egg tarts. 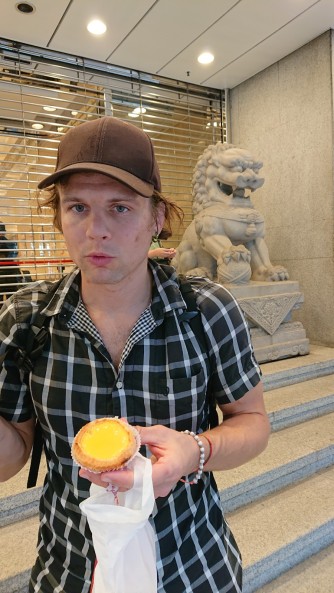 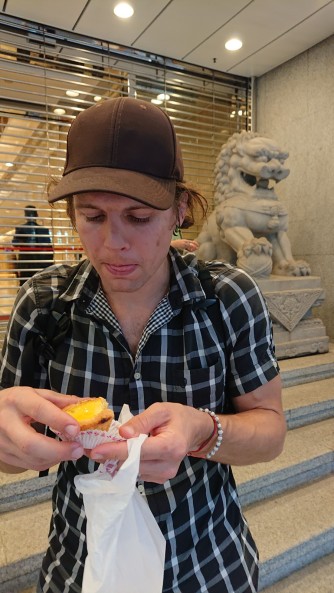 In terms of activities, the main things we did in town were to wander and ogle the cool skyscrapers and brave the crowds in the metro. We also took the ferry across the river (part of the public transit) to get some nice views of the skyline. 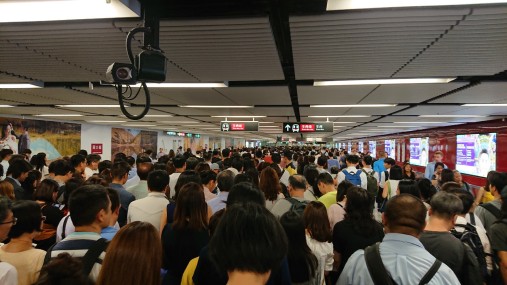 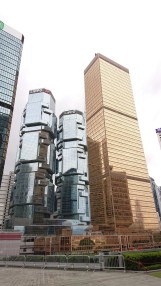 Christina loves Ferris wheels so we paid for a ride on the Hong Kong Observation Wheel ($20 HKD/person). At the wheel we arrived in time to witness a cheesy ceremony honoring the millionth rider of the the observation wheel, something that I only thought would happen in a Simpsons episode. 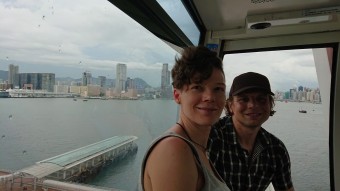 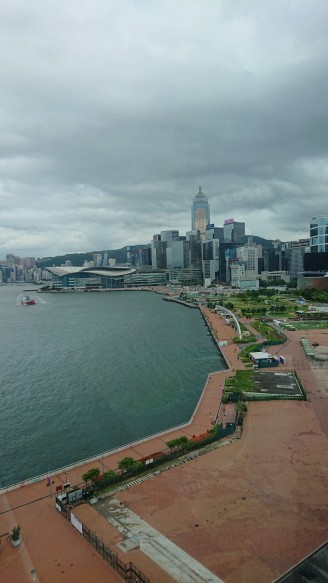 Back in Sheng Shui with our host Francis took us on some awesome alternative adventures. The sort of stuff that you only find while couchsurfing and the highlight of my visit to Hong Kong for sure. One day we rented some dockless OFO bikes and biked along a beautiful bike path for a quick view of the mainland border and a random encounter with cows. Then we hiked up a mountain to an abandoned border control lookout station and sat on the helipad with an amazing view of the sunset over Shenzhen China. Wow. Thanks Francis! 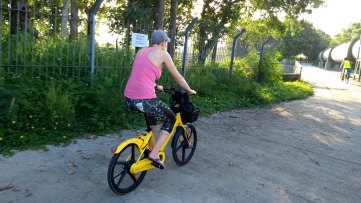 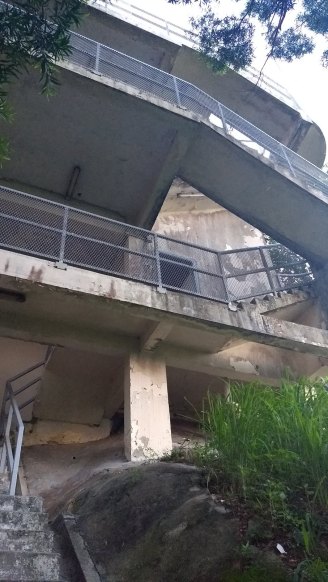 All in all Hong Kong definitely exceeded my expectations, and it’s a place I would love to go back to. For the most part our journey was through the main touristic areas, which was cool, but didn’t really feel that different from New York. But at the same time I had this feeling that there is lots of interesting things to see in the city and it holds a very unusual and special place in relation to Mainland China. I think it’s a really cool city to explore and would love to have some more time here to wander into the outskirts.

One thought on “Adventures with Chinese Bureaucracy in Hong Kong”